Download our 5 Keys to Data-Driven Year-End Fundraising eBook and start crushing your goals! 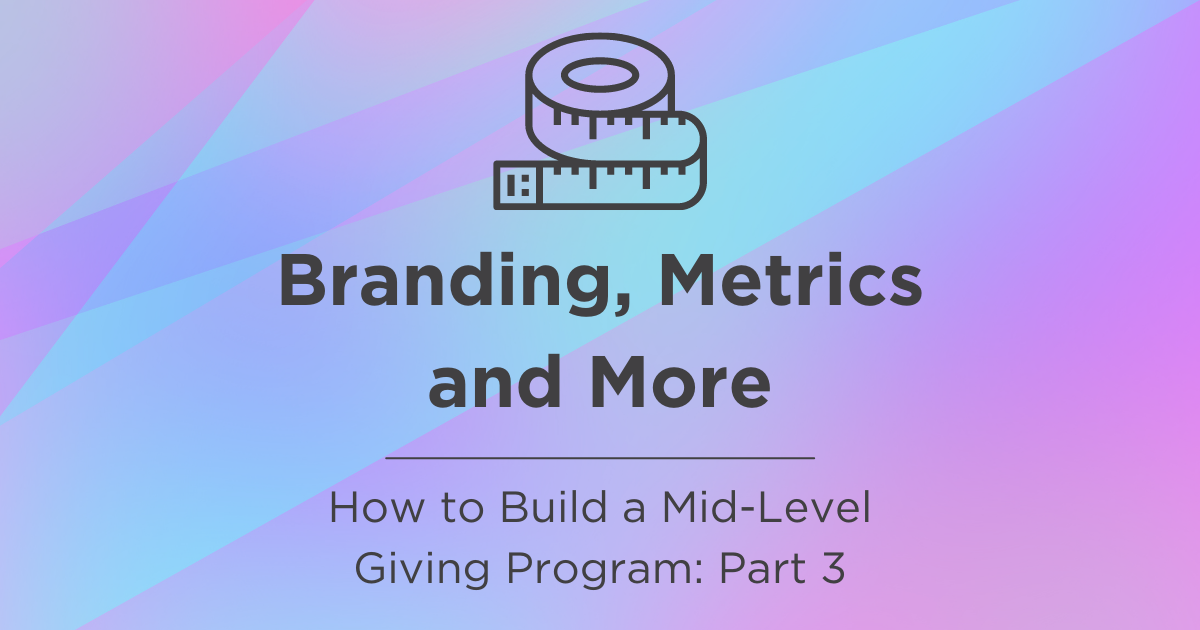 This is the third post in our series about mid-level giving programs. Read Part One, Part Two, and Part Four.

In our last post about establishing a mid-level giving program, we covered how you might define your mid-level tiers and four steps to follow from there, including what a winning team looks like and the collaborative workflow that can boost the launch of your new program.

Here, we discuss the decisions to make next, how you nurture mid-level donors once you have them, and the metrics to keep an eye on as your program matures. Let’s dive in.

To Brand or Not to Brand

After the steps we described in the previous post, you’ll need to decide if it makes sense to brand your mid-level program. Without one, “the program is merely an internal way of looking at those donors who give at a certain level, and that’s going to reduce their impact as a group for your org,” says Ryan Carpenter, vice president of client success at Pursuant.

At the same time, if your nonprofit already has a monthly donor program, a branded mid-level program might compete with it. And some nonprofits may have a lower threshold for major gifts — $5,000 and above, say — and that program may also have an existing brand identity.

But if those considerations don’t exist, then creating an external-facing brand for your mid-level program can be a very good idea. Just look to organizations like Feeding America, Year Up, and CARE for successful examples and how some have named theirs — The Opportunity Society at Year Up, for instance.

After you’ve named your mid-level giving program, develop a visual identity for it — a logo or set of images informed by data about your mid-level audience — and reinforce the brand throughout the organization’s communications. These efforts will nurture a sense of community and broadcast the importance of mid-level donors to your mission.

Don’t go overboard with special benefits for them, though. “These people don’t want premiums. They don’t want sweaters and hats,” says Carpenter. “They care about your organization and want to know more about it, so think about benefits for them as more about insider information and exclusivity. Is there a quarterly call or letter from the president that goes out to major gift donors? Can mid-level donors get the letter or join the call, too? Don’t be afraid to use what you already have as you focus on the exclusivity piece.”

In fact, because the pandemic has accelerated our adoption of digital tools, think about using formats like Zoom or Facebook Live to create exclusive events. Donors’ increased comfort with online formats invite your creativity as a fundraiser while also providing a path to scale your efforts.

The Care and Feeding of Your Mid-Level Donors

Now that you’ve established a workflow with the mass marketing and major gifts teams, how will your mid-level program distinguish itself from theirs? Remember that mid-level programs are a blend of those two, so you’ll borrow tactics and strategies from both. You’ll continue the direct marketing efforts that got your mid-level donors to your program in the first place, but maybe you’ll add a branded special appeal every quarter. You could even create a newsletter specifically for them.

Take a cue from your major gifts team and nurture one-on-one relationships with the top 5 percent of your tiered group. Prepare a list, allocate time to check in weekly with the folks who are on the list, and remember to take notes of feedback you receive, special requests, and so on — just like your colleagues in major gifts do.

If you have an especially long list or your organization is lean, get help from trusted volunteers but make sure to give them a call guide. Ideally, the calls aren’t just simple thank-yous or check-ins but fact-finding missions where you or your team of volunteers engage donors in a conversation that helps you better understand their motivations, the role that your organization plays in their life, and other information that paints a better picture of who they are. (Feel free to take inspiration from this guide.) If you use volunteers, be sure to debrief afterwards but also encourage them to take notes during the calls.

It’s likely to take some time to prime this cohort for the major gifts team, so be patient. There will be weeks or months when you don’t have names to pass on to them. Or it might be that the major gifts team is slammed and can’t take on new prospects just yet. It’s likely that only 1–2 percent of mid-level donors overall will upgrade to major gifts, but don’t be disheartened. That’s a meaningful number of qualified prospects for your pipeline.

Once your program is up and running, how do you measure its success? There are a few metrics we suggest tracking:

These are just a handful of the metrics that can inform a program evaluation, and you’ll want to ensure that colleagues on partner teams have KPIs and incentives that support yours. For instance, how many names from the direct marketing team were elevated to mid-level? How many prospects from the mid-level did major gifts officers engage? By establishing these metrics on other teams, you’ll encourage cross-collaboration, which ultimately lifts all boats.

While results are channel-dependent, look for measurable effects about six months after establishing the program. We’d love to hear how it goes, so please don’t be shy about getting in touch and letting us know what’s worked for you so far and where we could improve our recommendations based on the results you’ve collected.

And if you need a little help figuring out how to communicate with mid-level donors, check out our guide or the series as a whole!

Continue to Part Four: How to Design a Communications Plan for Your Mid-Level Giving Program

Looking for ways to identify the best candidates for upgrading to a mid-level or major gift? The GivingDNA platform was built to help time-strapped fundraisers understand the giving motivations, behaviors, and attributes of their most passionate donors and then create targeted segments to engage them. Learn more and get a demo here: givingdna.com/demo