How Do Major Donors Want To Be Thanked? 3 Strategies & Tips

This guest post was contributed by Eleven Fifty Seven.

How do you thank a supporter who has given thousands (or more) in funds or in-kind donations to your nonprofit? Much differently than you would with smaller, one-time donors.

Major donors go through many stages of development— the process of securing a major gift isn’t an overnight ordeal. Major donors are individuals who your team has been working with for some time, so it’s important to reflect this relationship and the magnitude of the donor’s gift in your thank-you efforts.

At Eleven Fifty Seven, we specialize in creating meaningful, experiential displays to recognize major donors. We’ve created this guide to share three top donor gratitude strategies and tips for your efforts through the following points:

According to the fundraising experts at Double the Donation, “Let your major gift donors know (more than once!) that you appreciate their generosity. If they agree, give them public recognition as well.”

Let’s walk through three unique gratitude strategies that will allow you to do just that.

A donor recognition display is a permanent installment that recognizes major and mid-level donors for their contributions.

When you imagine a donor recognition display, you may think of a singular, wall-mounted plaque that lists the names of tens to hundreds of supporters. However, with the assistance of innovative designers, donor recognition walls and other displays have evolved beyond more traditional formats. 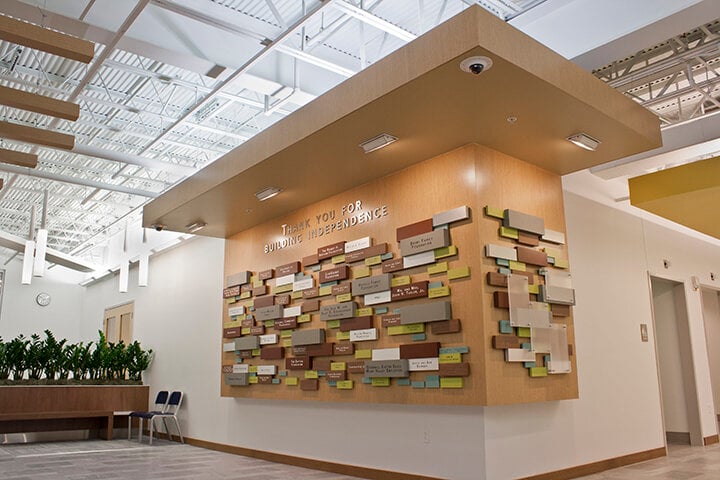 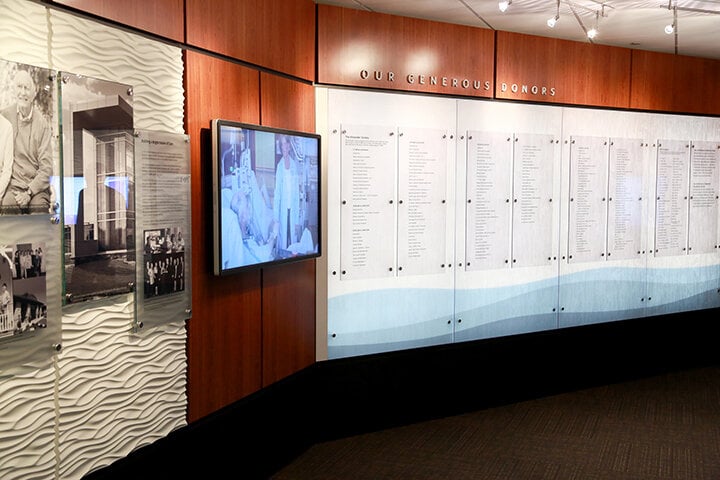 These showstopping displays can be branded to your organization, updated as more major donors contribute, and even designed to visually differentiate between major and mid-level supporters. By partnering with a design firm, you can ensure the creative process and implementation of this display goes smoothly.

Another great way to make your major donors feel like the superheroes they are is by highlighting them personally in a donor spotlight.

A donor spotlight involves highlighting one specific donor on your nonprofit’s social media profiles and website, such as in a blog post. In the spotlight, include a brief description of the donor’s history with your nonprofit and the impact that they’ve made thus far. You can also share relevant photos— such as images of them volunteering with your organization or touring your headquarters— and discuss their other interests beyond your organization.

For this strategy, remember that you’ll want to get explicit consent from any donor who you plan to highlight before making any posts.

A donor recognition event involves bringing your nonprofit’s major supporters, your board, and executive staff members together to thank your donors. These events are often over-the-top, with the goal of providing a great experience for major donors as a thank-you for all of their contributions.

This could mean a formal gala, a less formal luncheon event, or even an entertainment-based event such as a concert or comedy show.

The benefits of this major donor gratitude strategy are three-fold:

Bonus! The Eleven Fifty Seven team has written a comprehensive guide with tips on how to thank donors. Check it out for more ideas for your next appreciation campaign!

While these three stand-out strategies for thanking major donors are a great start, how you apply the strategy can be more important than which gratitude method you choose.

For example, if you create a donor recognition display but it’s not eye-catching or visually appealing, it’s unlikely to be the most effective way to thank your donors. Through our efforts helping nonprofits craft memorable donor gratitude displays, we’ve discovered five tips that can set your strategy up for success.

When thanking major donors, make sure your thank-you effort is:

Our final recommendation would be to work with professionals that specialize in the specific major donor gratitude effort that you’re considering. An event planner can bring any gratitude experiences to greater heights, while a design firm can create an innovative, eye-catching donor recognition strategy for your supporters. Drawing on a partner’s expertise will remove much of the stress and risk from your team’s shoulders.

It can feel overwhelming to thank supporters who have donated thousands of dollars (or more) to your organization. However, there are a variety of strong strategies to express proportionate gratitude for those gifts and continue engaging major supporters going forward. What's more, tools like the GivingDNA Platform enable you to learn more about what your major donors care about and how they would prefer to continue engaging with you.

With these tips, you’ll be off to a great start. Good luck!

Derrick has been referred to as a connoisseur, marketing guru and even a prodigy.

He began his career with Eleven Fifty Seven as an intern during the Summer of 2019.

Since then, Derrick has graduated from The Ohio State University and has joined the team full time working in marketing and business development.

He has grown to love the not-for-profit world by seeing the impact made possible through philanthropy.